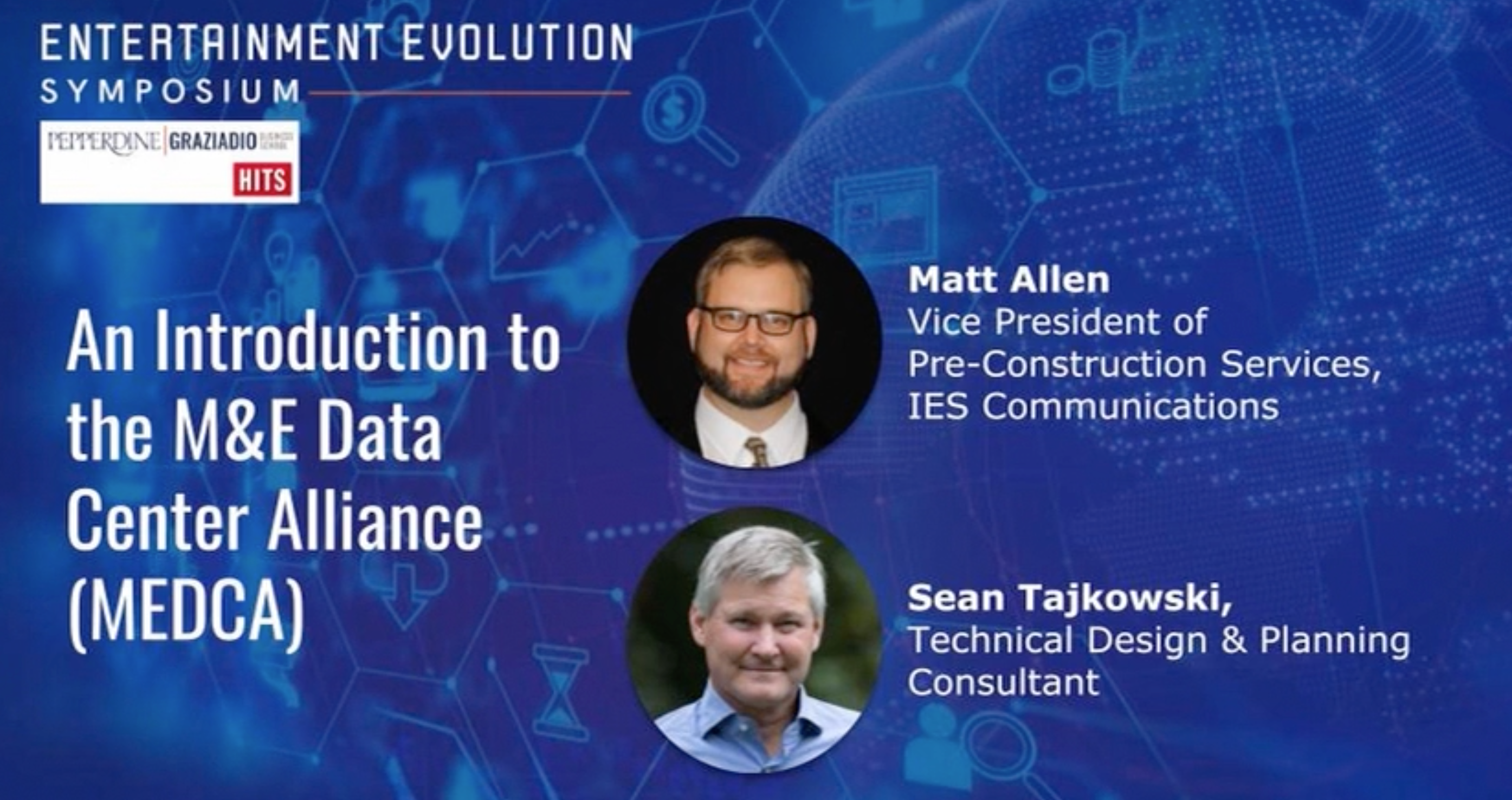 MEDCA Lays Out Mission, Stresses Importance of a Good Foundation

During the session, MEDCA laid out its mission, which is to provide continuing education, information and best practices to develop a good foundation for the explosive growth in M&E data centers that is expected coming out of the COVID-19 pandemic.
\“We need data centres because there is a significant amount of compute required to do [many] tasks,” according to Matt Allen, VP of engineering and pre-construction services at IES Communications. “Everything from liking a cat picture to post production of an animated short – all these things require massive amounts of data and compute,” he explained.

Therefore, compute environments are kept in very specific places that are “essentially giant warehouses full of computers, kept at the proper temperature, kept in the proper environment in order to ensure that they run at their most efficient and for the longest period of time that they can,” he said. “We bring giant pipes full of data back and forth between those out to smaller data centres, within regions, within municipalities and within studios.”

There are also “various versions of data centres,” he said, noting “private cloud is often a small data centre located on a premise and then that goes out to a public cloud which can be varying levels of distance away from [the] end user.”

Meanwhile, the “big buzzword these days is the edge, so we’re pushing these compute environments as close as we can to our end clients,” he added.

There are multiple types of data centres used in the media and entertainment space, Sean Tajkowski, technical design and planning consultant, pointed out.

“We think of data centres as more of what we call hyper scale: aisles and rows in those big block houses or very large warehouses – but that’s not really the case,” he noted.

A data centre is actually “everything all the way down to a single server” in just a 25 rack unit (RU) or even in a 8 U (server rack unit) – “anything basically that’s in a rack that’s serving data,” he said. “You’ll start to hear a lot more about edge” also, he predicted.

Small: A few racks within a facility or a single 25RU rack, which is what you can expect to see in a typical visual effects house

Touring Rack: On-set or near set

Noting that we are starting to see data centres become required on sets, Tajkowski said: “It’s funny. About 10 years ago, I couldn’t even get a computer on set practically and now we’re seeing, with virtual production, this explosion of on-set materials.”

Using a construction analogy, Tajkowski said: “If you were building a house, you would not build your stick frame or your metal frame building and then do the dry wall … and then put the concrete. You have to build from a foundation.”

However, he explained: “One of the things that we find in the entertainment area is we’re always concentrating on process and not necessarily the foundation. The foundation is last…. That’s like building a facility and putting the foundation last. It’s very, very important and it’s actually part of the [Open Systems Interconnection Model] (OSI), which is the computer model [and] an industry standard worldwide.” It starts with what’s called layer one, the physical infrastructure, which serves as the foundation, he said.

“If you don’t have a good foundation, the rest of the process most likely won’t work,” he warned. “Just like if you built a building and you didn’t put a foundation under it, most likely it would fail.”

When you build a building, the client goes to an architect, who has to deliver those plans to the city, he noted. At that point, governance comes into the picture. After all, “it’s very important when you build something that you do it to a standard and you do it to a code because it will catch up to you” otherwise, he warned, adding: “If you’re building for today and it’s working, that’s great. But you’re not building for tomorrow and you’re going to find that out at the wrong time.”

MEDCA is not a standard; it’s an industry position, according to the group. On tap as its first deliverable is a draft standards document made up of a collective of best practices and codes that pertain to the M&E industry within data-centric processes. The document will be validated and approved by subject matter experts who will provide a positioning paper that is written and validated by the various manufacturers who sit on the telecommunications and data centre governance committees.